Is vaping safer than smoking?

Is vaping safer than smoking?

UPDATE Oct 2019
The outbreak of serious vaping-related lung injuries in the US and Canada is almost certainly due to black-market THC (cannabis) oils sold by street dealers, NOT nicotine e-liquid. Download our one-age pdf handout here for more.

Vaping is not risk-free, but scientists agree that it is far safer than smoking. According to the UK Royal College of Physicians report in 2016:

There is still some uncertainty about long-term safety as vaping has only been around about 10 years but the evidence so far is pointing towards it being much safer than smoking.

This is not surprising as most of the harm from smoking is due to the tar, carbon monoxide and 7,000 other toxic chemicals produced by burning tobacco. Vaporisers do not contain tobacco and there is no combustion or smoke. According to Public Health England

‘the constituents of cigarette smoke that harm health – including carcinogens – are either absent in e-cigarette vapour or, if present, they are mostly at levels much below 5% of smoking doses (mostly below 1% and far below safety limits for occupational exposure)’

Vapour contains small amounts of toxins such as formaldehyde, acetaldehyde, cadmium and nitrosamines which are associated with cancer. However, these toxins are found at much lower levels than in tobacco smoke and mostly below the levels which cause harm. Watch this short video from Public Health England which demonstrates the dramatic difference between smoke and vapour.

The overall cancer risk from long-term vaping has been estimated at less than 0.5% of the risk from smoking.

Further confirmation of the reduced harm from vaping is the dramatic reduction in exposure to carcinogens and toxins (biomarkers) measured in the blood and urine of vapers compared to tobacco smokers.

The small health risks from vaping should be compared to the substantial risks from smoking. Two out of three long-term smokers will die from a smoking-related disease.

The risk to bystanders from ‘passive vaping’ appears to be minimal. Negligible amounts of nicotine and other chemicals are released into the air when the user exhales. Furthermore, the vapour consists of liquid droplets which evaporates almost immediately (within 10-15 seconds) after exhalation, unlike cigarette smoke which persists in the air for 30-45 minutes.

The report by Public Health England in 2018 concluded:

Based on reports from research studies so far, smokers can expect significant health improvements after switching to vaping, such as:

Although nicotine is the main addictive chemical in tobacco, it has relatively minor health effects except in pregnancy, where it can harm fetal development. The UK Royal Society for Public Health says nicotine is ‘no more harmful to health than caffeine’ and by itself is fairly harmless. 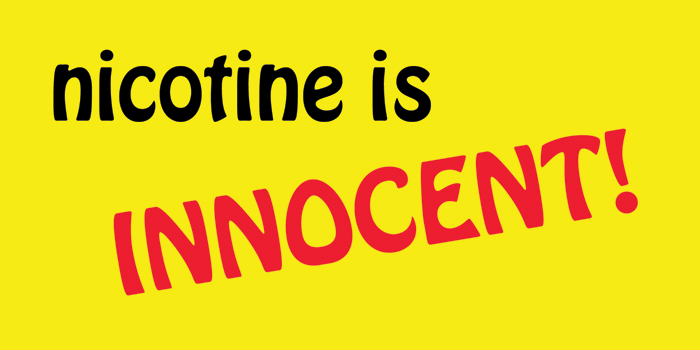 According to the UK Royal College of Physicians report

There is no evidence that nicotine causes cancer in humans, according to the US Surgeon General and the International Agency for Research on Cancer. It also does not cause lung disease.

Nicotine does have some relatively minor effects on the cardiovascular system. It causes a temporary increase in the heart rate and blood pressure and may induce an irregular heartbeat (arrhythmia). Nicotine also increases the body’s resistance to the hormone insulin, leading to increased blood sugar (glucose) levels. However, these effects from nicotine are much less from vaping than they are from smoking tobacco.

In animal studies, there is some evidence that nicotine may be harmful to the developing adolescent brain. However, it is unclear how this research in animals translates to humans. There is no evidence of harm to the adolescent brain in humans so far. It is important to note that nicotine replacement therapy products (patches, gum, lozenges etc) are approved for use in adolescence from the age of 12 and appear to be well tolerated.

Nicotine also has positive effects as well. It can improve concentration, fine motor coordination, memory and cognition (brain function). It also helps with weight control and is a mental stimulant. There are a number of diseases known to be improved by nicotine, including ADHD, schizophrenia, Parkinson’s disease and ulcerative colitis.

For more about the health effects of nicotine, click here.

Small amounts of potentially toxic chemicals and some carcinogens are present in vapour. These chemicals include:

These chemicals are from

Although some of these chemicals are potentially harmful, they are generally less than 1% of the concentrations in smoke. In larger doses, they are known causes of cancer, heart and lung disease.

A leading analysis confirmed the presence of potentially toxic compounds in vapour, although at very low doses:

‘The levels of potentially toxic compounds in e-cigarette vapour are 9–450-fold lower than those in the smoke from conventional cigarettes, and in many cases comparable with the trace amounts present in pharmaceutical preparations’.

Because the doses of these toxins are so small in vaping, the risk of harmful effects is substantially less than smoking. So far there has been no sign of any serious health effects from vaping.

The effects of long-term inhalation of these low levels of chemicals is unknown. However, based on what we currently know about the nature of these chemicals they are likely to be far safer in the long-term than smoking.